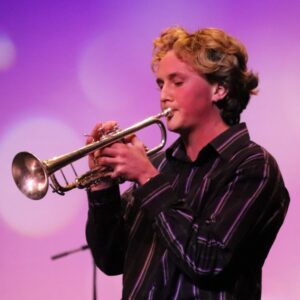 Aron began playing trumpet in grade 3. He was able to pursue his interest in music through the Combined Primary Schools Southern Concert Band and then Taroona High School. A current Elizabeth College student, Aron has pursued his interest in music and has been studying composition under Michael Sydney Jones and Kelly Ottaway. He has composed for a wide variety of ensembles and conducted his own piece at the Elizabeth College Stage Band Summer School. This is Aron’s first piece for wind symphony, and he has enjoyed working with the wide palette of tone colour this ensemble offers.

Program notes: A Day in My Mind

‘A Day in My Mind; is an exploration of my anxiety.  The varying dynamics represent how anxiety attacks can affect people in different ways and can seemingly occur out of nowhere. I wanted to explore ways to use the wind ensemble, showcasing unique colours through both individual sections and the blending of sections. It was an interesting experience to write for such a large ensemble, and I enjoyed hearing my piece come to life through these wonderful musicians. 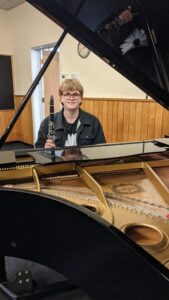 Guy started playing music in Year Four when he began piano lessons. In Year Seven he was selected to play clarinet in the Taroona High School band program and has been playing ever since. His interest in music as a career began in Year Eight when he joined the Tasmanian Youth Orchestra Wind Ensemble. Since then he has played in a number of ensembles including Hobart City Band Youth Winds, the TYO Sinfonietta, the TYO Flagship Orchestra and the Hobart Wind Symphony. Guy began writing music in Year 11 in his Music 3 class at Elizabeth College under the tutelage of Michael Sydney Jones and discovered a passion for it. Guy conducted the debut performance of his piece Tilting at the Elizabeth College Stage Band Summer School program in January 2021. He is currently finishing Year 12 and plans to study music next year at university.

Program notes: The Cathedral and the Burning City

This piece is based on two works by the Polish painter Zdzislaw Beksiński, one depicting a cathedral-like structure and the other depicting a faceless creature fleeing the ruins of a burning city. Beksiński’s work has a darkness about it which I wanted to be reflected in the piece. With two musical ideas representing ‘The City’ and ‘The Cathedral’ I created a story through the piece, indicated by the headings that appear at various points. The ‘Cathedral’ theme is, unless specified otherwise, to be played at the constant dynamic level written. This is to emulate the sound of a church organ. The tubular bells at the end are representative of a carillon and are the most important voice. Hence, they should be played as loudly as possible.